A grateful patient donated $1,000. Spaghetti dinners and dances raised more money. By 1952 the building fund totaled $50,000 — $60,000 shy of the $110,000 estimated cost. Nevertheless, the hospital board decided to commence building, and in September 1952 the cornerstone was laid. Just as things were getting started, the coffers dried up and construction halted.

What seemed like the end was but the beginning. One day that fall the geometry instructor at Arbor Vitae-Woodruff High School was trying to explain to his class the magnitude of a million and suggested the students collect a million of something. “How about one million pennies?” a student asked. “A million pennies is $10,000!” another student piped in. “We can donate them to Dr. Kate’s hospital.”

When the press got wind of the million penny drive, an avalanche began. Pennies rolled in by the wheelbarrows full, from 48 states and 23 countries. By April 1953 the students had met their goal: one million coppers — four and one-half tons of them!

If Dr. Kate thought it was raining pennies from heaven, she had seen nothing yet. When Ralph Edwards, host of the popular TV program This Is Your Life, caught wind of the million penny drive to build Dr. Kate’s hospital, he lured the doctor to California under the guise of her attending a medical convention. On March 17, 1954 a flabbergasted Dr. Kate found herself on national television.

It’s here! Rolling off the presses! 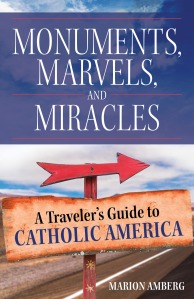 America’s got faith! You’ll find it in every state – in grand cathedrals and tiny chapels, in miracle shrines and underwater statues, and even in blessed dirt. Finding these sacred places hasn’t been easy, until now!

Monuments, Marvels, and Miracles: A Traveler’s Guide to Catholic America takes you to more than 500 of the country’s most intriguing holy sites, each with a riveting story to tell. Stories about:

Put the car in drive and let’s go!