It’s a traditional Nativity scene. Christ Child. Angels. Wise men. Shepherds and sheep. What isn’t so traditional is who made it: German POWs incarcerated at Algona, Iowa.

The story begins in 1944 when Sergeant Eduard Kaib was captured in France and shipped to Camp Algona, a base camp in north-central Iowa that housed 3,200 German POWs and oversaw 34 branch camps in Minnesota, Iowa, and the Dakotas.

Suffering from war injuries, Kaib was also mired in depression. He missed deeply his homeland, family, and German Catholic religious traditions. One day, the radio operator had a divine idea.

END_OF_DOCUMENT_TOKEN_TO_BE_REPLACED 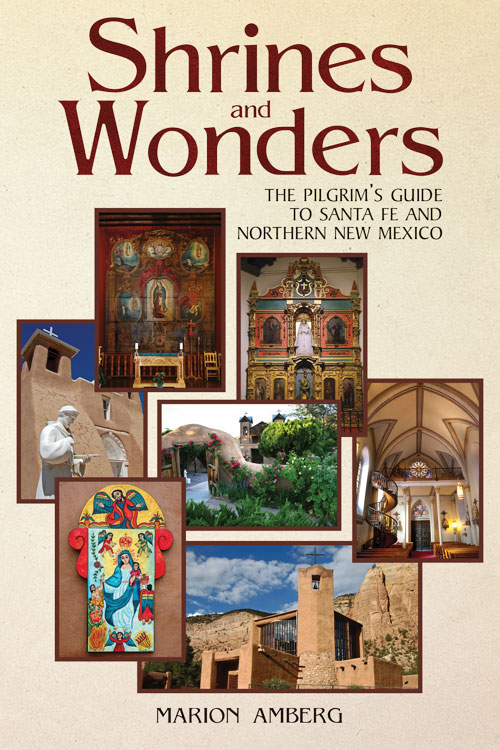 Welcome to northern New Mexico, land of shrines and wonders! Long called the “Holy Land of America,” this land is like no other: inexplicable miracles, a weeping statue, and rock formations that resemble scenes right out of the Bible. But holy doesn’t mean stuffy. Legends never are! Northern New Mexico is blessed with charming stories of the supernatural, incredible tales of the Wild West, and the most enchanting vistas this side of heaven!

Our spiritual adventure begins in Santa Fe–Spanish for “Holy Faith”–and then wends north. We’ll visit more than 25 holy sites (illustrated by 75 photos), including historic El Santuario de Chimayo, known as the Lourdes of America, and the stunningly beautiful Monastery of Christ in the Desert.

May you sense the divine as you travel this hallowed land and follow the footsteps of many holy people–even a canonized saint. Who is it? Join the pilgrimage and find out!

To order your copy, click on the Books tab above.

“Marion Amberg has provided to the American pilgrim a wonderful guide to the many sites in and around Santa Fe and Northern New Mexico — sites that have been revered for ages as places where God and the saints are especially close to us. The tradition of spiritual pilgrimage is one that thrived in Europe, but found a natural home among the people of the Southwest. This book lovingly shares with its readers the history and spirituality of many of the most important pilgrim shrines in Northern New Mexico and encourages us all to leave home and be pilgrims in our own homeland.” — Fr. Kevin A. Codd, author “To The Field of Stars: A Pilgrim’s Journey to Santiago de Compostela”